Question! Is the rise of NFTs the dawn of the Web 3.0 era? Gary Vaynerchuck, who has made a career of being a step or two ahead of everyone, thinks so. Recently, he made a strong argument during one of his latest Marketing for the Now podcasts. Before I entertain the idea of a 3.0, let’s first briefly highlight the Web 1.0 and Web 2.0 eras. 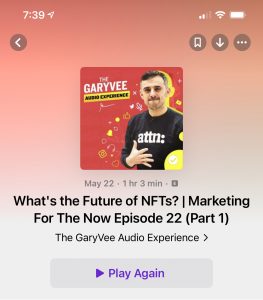 A central thesis to my digital marketing philosophy is the shift from the top-down world to the current crowd-powered bottom up-world. Within this thesis is the Web 1.0 era (1995 to 2001) and the Web 2.0 era (2004 to the present). For those of you have not be been tortured in class recently and need a refresh, here we go!

-The Web 1.0 era featured the birth of a number of interesting Internet companies. It also was a top-down world at this time (meaning very few people were in control), the crowd was passive, and crowd culture was practically non-existent. While there was some value in first mover advantage, very few of these companies were built to last. In fact, we could probably count on our own two hands the number of companies that are still relevant today. Most of these Web 1.0 firms eat though their venture capital and IPO cash quickly since they had no idea how to be profitable. This era was certainly a bubble, where everyone “wanted in” even if they had no idea what the Internet was, how it worked, or how to describe it to friends and family members. (That kind of sounds like crypto now, right?) In reality, very few companies were doing anything different on the Internet than what was happening in the non-digital real world. (Look mom, I created the first pet store on the Internet!) In addition to the lack of profitability post IPO, a highly contentious 2000 presidential election, the weaking of the overall economy after a growth years of the late 90’s, the mind blowing worst merger in the history of business (AOL and Time Warner) and the tragic events around 9/11, all lead to the demise Web 1.0 by the end of 2001.

-One of my graduate students accurately characterized 2001 to 2004 as the “internet winter.” There was a change during this time period as all the venture capital and Wall Street money dried up. By contrast, the digital business that started during this time were funded by angel investors and/or individuals who cashed out when their Web 1.0 businesses were bought like the PayPal mafia.

-The Web 2.0 era ushered in a fundamental change in business practice and eventually consumer culture. Specifically, the world shifted to a bottom-up, on-demand, crowd powered digital world. We do not get a Facebook in 2004 or YouTube in 2005 or Twitter in 2006 if the crowd was not in control and provided 100% of the content for those platforms. What was key to Web 2.0 world was that businesses and industries were being created by doing something that could ONLY be accomplished digitally, as opposed to just recreating something on the Internet that was basically the same thing in the physical world (like a pet store). In other words, the Web 2.0 businesses accomplished something using the digital technologies (like crowdsourcing) that would be practically impossible in the normal non-digital world. Without a bottom-up crowd powered shift in digital consumer culture, we do not get an Uber or Airbnb 10 years later. I also doubt that we would have seen the speed and scale of the #MeToo and #BlackLivesMatter movements without the power of the crowd.

I’ve been teaching a digital marketing course on the undergraduate and/or graduate level continually since 2004. During this time, I also have been looking for the next shift, the next major new thing, the next major change in digital practice. In 2008, many argued that mobile apps were a new wave. In 2012, others argued the shift away from desktops to smartphones as the dominant platform for accessing the Internet was the new 3.0. In reality, it easy to make the case that these two phenomenon were fueled by the Web 2.0, not replacing it.

AR and especially VR could be a fundamental shift, but we have been talking about those for the better part of 8 years. Neither have fundamentally changed digital culture (yet), meaning the market of either of these digital technologies is not exponential. I thought the 2015/2016 “internet of things” conversation had potential. The idea of making the non-digital (i.e., keys, watches, light bulbs, appliances, etc.) and transforming them to WiFi connected products was super interesting.  A Rolex is a beautiful watch, but in reality, it really doesn’t do much other than tell the time and signal to people around you that you have the cash to buy a Rolex. My Apple watch is my primary fitness device, that happens to play podcasts when I go for a run, takes phone calls and texts when my smartphone is not around, and becomes my touchless digital wallet for 50% of my credit card purchases. A Tesla is more digital than non-digital. Ring, AirTags, Nest, Alexa (home controller functions), Philips WIFI light bulbs, etc., are all very interesting examples of taking a physical/analog product and transforming them to internet connected digital products, but I was unsure if this was huge enough to be a fundamental shift. Then, non-fungible tokens (NFTs) exploded earlier this year and this is something worth paying attention to.

Powered by blockchain, which provides a digital record of everything related to that NFT, imbues either a physical or digital product with a historical record or provenance that is undisputable. For instance, an entry level Hermes Birkin bag starts at $8,500 and it is a highly sought after fashion item with a wildly active secondary market. Well, if the Birkin bag also had a digital record of provenance and a particular Birkin bag was formally owned by Michelle Obama and happened to be the bag she wore when visiting the Queen of England, I could not imagine how much that Birkin would go for at a charity auction. Because of a digital record of provenance, fully digital products can also have significant value. I’ve collected baseball cards my whole life but those digital NBA TopShot NFTs are just mind blowing.

The digital record of provenance changes everything and once you have this thought in your head, it is easy to expand it to a multitude of markets. What if the 2021 Super Bowl was Tom Brady’s last trip to the big dance? Because of the pandemic and social distancing, the stadium was half full at best. If the NFL turned those few tickets into an NFT which feature the a digital record of provenance along with some video highlights of the game, I cannot imagine how much one of those gameday tickets would be worth. Music, books, collectibles, concert tickets – the list could be endless.

Powered by the blockchain, NFTs could fundamentally change everything, just like how the Internet (eventually) changed everything. Is this the Web 3.0? It could be, and it’s certainly something I’m following. We will know for sure in the upcoming years when we can reflect back and measure change. For now, keep investigating and enjoy the ride.