You are here: Home / Apple / I’m Looking Forward to Self-Driving Cars: The Automobile as a Service

Let’s be direct here folks – I like driving. I drive a lot. My commute is 160 miles round trip when I travel up to South Orange and teach at Seton Hall. In my younger days, I had two different cars with a 5-speed (and I miss driving stick). In the Ph.D. years, I would drive Philly to Tampa non-stop. Especially today with digital streaming of podcasts and Audible, I’m OK being in the car but I’d give it all up if the car drove itself, which leads to this question/comment from Mark Morgan:

“Looking forward to future posts Dr. Dan-o! You know I love anything automotive. Recently spoke to brilliant (disruptive) folks from Ark Invest (run the Innovators EFT) who still hold immense conviction in TSLA as the future of autonomy and electrification (even according to NHTSA).

Using a 10-year time frame (i.e., taking us to the year 2030), I can easily see some monster disruption in the auto industry. Mark is correct that the first significant disruption will be the electrification of the auto industry and this will not take 10 years. Tesla is on an island at the moment where they have to bear all the costs to the most expensive component of the electric car: the battery. Multiple reports state that the batteries are 50% of the entire manufacturing costs of a Tesla. Could you imagine of if those batteries were 20% or 33% or 50% cheaper than current manufacturing costs? When the economies of scale kicks in for batteries, there will be more manufactures go all-in on electric cars.

If we look globally, this is exactly what’s happening. Germany (VW, BMW, Mercedes) are working towards 50% of their fleets being fully electric by 2025. Even Porsche has an electric car coming out next year. I drive a hybrid Prius (50 to 56 MPG on those Seton Hall commutes) so Japan (Toyota and Nissan) are in the game as well. We also cannot forget China where Tencent has a 10% stake in Tesla and will begin manufacturing Teslas in China within the next year. Moreover, Warren Buffett’s Berkshire Hathaway has a stake in China’s BYD (both cars and buses). Given South Koreas’ electronic industry (Samsung and LG) and their close ties across companies (Hyundai and Kia), it wouldn’t take much for South Korean auto brands to get in the game. 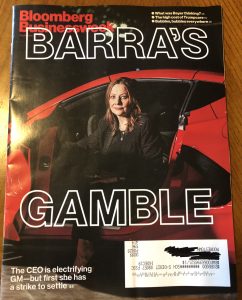 What does this all mean? Well, those players who are not in the electrification game like Ford, Fiat, Jeep, Dodge, Chevrolet, etc., should expect a rude awaking headed their way.

While electrification shift will happen quicker as those balls are fully in motion, the second shift, autonomous/self-driving, should logically follow soon thereafter. As much as I enjoy being in the car, I’d rather have that time back to do something been more productive (like writing more DigNuggetville blog posts). The real pain point though is the ownership cost of a car. Between car payments, insurance payments, maintenance payments, gas payments, state taxes (yes, I used to live in Massachusetts), owning and maintaining a vehicle is very, very expensive considering you only use it max 15 to 20 percent of the day (and that’s my kind of commuting). Why are we doing this?

At the moment, Uber and Lift are better taxi cab experiences. However, we are not that far away from having the automobile as a service. Meaning you will use you Apple phone to order your Apple car on demand 24/7.  As soon as the autonomous driving technology gets out of the innovators stage to the early adoption stage, we’ll see the Ubers of the world and the Lifts of the world, and the Didis of the world – soon followed by Apple and Waymo (aka Google) offering you unlimited, on-demand auto service for around $1,000 per month. And that $1,000 per month would be significantly less than car, insurance, gas, maintenance, and other auto ownership costs.

This would result in a monstrous disruption in the auto industry. Those auto brands who are not presently playing in the electrification and autonomous game better open up that checkbook because if they don’t buy-in or merge in now, they will be too late in 5 or 8 years.  Just like how Kodak was at the top of the photography game and in less than a 10-year window were gone, this will happen in the global auto industry. So, take those long bets on the current players in this space discussed above but also don’t forget about the key suppliers to the automotive electrification and autonomous future like the mapping companies and the LIDAR systems, they will become major players in this ecosystem too.

That’s something major to think about today…