Mid-way through 2021, I asked if we were at the dawn of the Web 3.0 era. Just because journalists and pundits were throwing terms around doesn’t mean the digital world has shifted. Without question the blockchain – crypto – NFT side of the Web 3.0 storyline is fruitful and saying that it’s “gaining traction” would be an understatement. In addition, the Metaverse – VR – AR storyline has certainly picked up steam in the second half of 2021. Oculus may have been the “it” technology gift (sorry PS5 – not enough supply) for the holiday season. Now I do not think this is an “or” conversation, it’s too early, but at present, one or both of these storylines will evolve into the new Web 3.0. 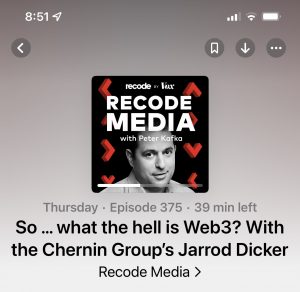 I listen to a lot of podcasts and this week I listened to an excellent episode this of ReCode Media with Peter Kafka interviewing Jarrod Dicker from the Chernin Group. My recommendation of this particular episode is two-fold; first, the interview is significantly less hyperbolic than many of the Web 3.0 interviews I’ve heard over the past year. Second, it provided a clear timeline of the rise of Web 3.0 as well as a straightforward definition. When asked, Jarrod defined Web 3.0 as:

“A new Internet, owned by users and builders that is coordinated by a bunch of different means, whether that tokens or NFTs, etc. But the big revolutionary component of Web 3.0 and why people are excited is that its bringing ownership to the Internet in a digital form for the first time ever.”

The most important word in that entire quote is ownership. It’s the fundamental underlying technology, the blockchain, that powers Web 3.0 which imbues this digital scarcity – something that never existed before. If the blockchain record says there are only 500 copies of Lebron’s Top Shot NFT, then there are only 500 copies of that digital asset. The proprietorship and provenance is unquestionable as per the digital record. In sum, this has the potential to change art, books, music publishing, ticketing, sports cards, collectibles… the list is endless.

Something to listen to today!